As one of the top products globally for sports nutrition, protein powder providers face fierce competition from a growing number of manufacturers. There are now so many different types of protein powders to choose from as well: soy protein, whey protein and more. Nowadays, it is most common that whey protein is used for the manufacturing of protein powder with the aim of increasing sports performance and building more muscle.

In this article, we look at exactly how protein powders have conquered the sports market, and become the dominant force they are today.

Even our antique medical fathers, Hippocrates and Galen recommended that their patients use whey (milk is composed of two types of proteins – whey and casein). In the 12th century, one of the greatest conquerors of all times, Genghis Khan, made his army take milk powder. It is actually one of the first powered milks in history that are officially dated. Moreover, why not, it is easy to store and easy to use – just mix with water, and you are ready to go.

What kind of shakers do you think they used way back when?

We have no way of knowing that because the very first record of producing powdered milk with modern methods was first documented by Osip Krichevsky (Осип Кричевский) in 1802 in Russia. 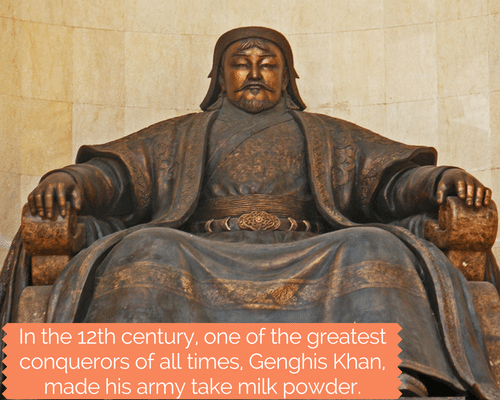 One of the first manufacturers of special diet products which were produced in mass quantities appeared in Switzerland. In 1867, a well-known company named Nestle created special foods for infants, which were purposely produced for mothers who could not breastfeed their children. Their goal was to reduce the death rate of infants. This product consisted of cow’s milk, wheat flour, and sugar. In the early 20th century, many more products of a similar nature started to appear; this was when the manufacturers started to pulverize eggs and soya.

Interestingly, in 1920, we saw the introduction of the first methods of production for not only powdered milk but also for powdered whey too. Whey was a by-product of cheese production. Something which isn’t commonly known today is that for a very long time it was put into the sewage system, and it was also used as a fertilizer and for feeding pigs. The reasoning for this is that they simply had nowhere to put it. At first, there was quite a low-quality whey powder, which contained a lot of milk sugar (lactose), and only a minimal amount of protein. Over time, the methods of obtaining protein continued to improve.

However, it was only in (1950 – 1960), some 50 to 60 years later, that the manufacturers managed to get a better quality product. Mass production of whey protein powder began after 1970; this was when the improved filtering methods were readily available to the manufacturing industry. It was then possible to obtain whey protein in two forms: whey protein concentrate and isolate. The main difference between them was in the filtering grade. These products contained less lactose and more protein. 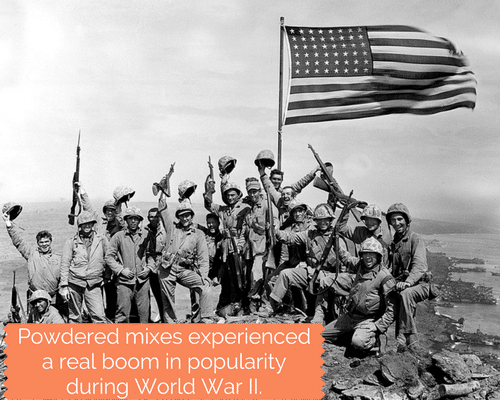 Powdered mixes experienced a real boom in popularity during World War II. Such as with the Genghis Khan time, they were easy to use and preserve. This made them extremely suitable for war conditions. Looking back into the history of protein powder, this could also be seen as a breakthrough point into the sport industry when supplements became a focus area. We didn’t need to wait long at all, because in 1950, the first official bodybuilder protein mixtures appeared, such as “Hi-Protein ” and “44′ The Supplemental Food Beverage”.

I suppose there were two main reasons why supplements entered sport industry: money and ease of use. Now, if we look at the purchase of the dumbbells or a barbell, people only really buy these products once in a lifetime. With protein powders, the frequency of the purchase is a lot more, and as such, the profitability of the business is much greater. Back then, the information which was available regarding the benefits of sports nutrition was quite limited. It was no surprise that many athletes took 300 g – 700 g of protein per day. In order to get as much protein from real foods, they would need to drink 3 – 5 liters (1 – 1.5 gal) of milk and eat between 10 – 30 eggs per day etc. With the powders mixtures, it made the intake of protein much easier and quicker.

The first protein powders consisted of soybean powder, along with a number of other dry ingredients. There were a lot of complaints about the quality of powders. Many people complained about allergies and bloating. There were a lot of features in various publications about proteins and many special supplements which were specifically about sports nutrition As such, the population quickly became aware of these through a range of marketing activities to cover the expanding product range which included: protein pills, liver extracts, protein powders and vitamin B complexes etc. Not all of these products were actually effective, but nevertheless, they were all being heavily marketed. 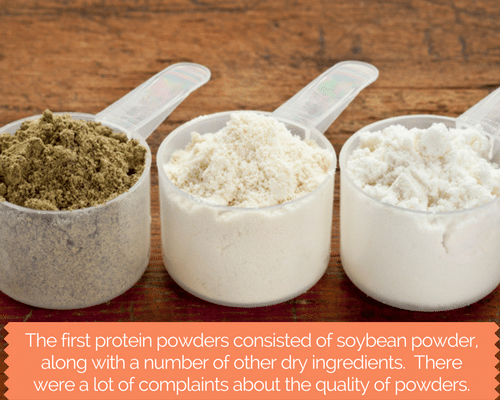 By 1960, there were some manufacturers in this industry which had introduced an impressive amount of products into the marketplace, and for some businesses, the number of products they had available exceeded sixty! Bob Hoffman, Irvin Johnson and brothers Weider were perhaps some of the most well-known producers. After 1960, the situation, along with the marketplace started to change. It was evolving. We saw the introduction of anabolic steroids into strength sports and also there was a change in the protein powders too. Soya was a cheap raw material, so it continued to dominate in its field, but the market was slowly leaning more towards whey and egg proteins.

Professionals started to choose the latter, eggs and whey protein powders because they considered them to be a much better, more effective product. For example, a famous bodybuilder named Vince Gironda called soy proteins “complete shit!”

After 1970, whey proteins powders became more and more popular, and one of the main reasons for this is that improved filtering methods had been introduced, making the product more effective. It was also at this same time that new products, such as fat burners and gainers started to make their way into the marketplace. It was only after 1990 that soy protein powders came back into play.

As we can see, change and development in this industry is a continual process. Nowadays, the most popular are whey proteins powders among athletes. However, that trend is changing. Many people now are opting to choose a vegan lifestyle, so more and more vegan protein powders like hemp, rice, and pea are coming into play, along with of course the soy proteins.

As you will see, the history of protein powders is an interesting one. The marketplace is diverse and dynamic and will need to continue to be that way in order to keep changing to the demanding requirements of the consumer.

What is Freekeh and What are Its Health benefits?

Top 10 Facts About Yoga Everyone Should Know