In terms of bodybuilding, there is one muscle group that people generally tend to focus on, and that is the biceps. When people flex their muscles, nine times out of ten, it is the biceps that they will flex. In fact, if you want to get an idea of just how popular the biceps are, just look at all the nicknames they have. You have ‘guns’, ‘swans’, ‘Pythons’, and much more besides. Can you think of any other muscle groups with nicknames like that? Probably not.

Though a relatively small muscle group, the bicep muscle is far more complex than you initially realized. If you thought that building your biceps up was simply a case of doing as many dumbbell curls as possible, you are in for a very rude awakening. The biceps muscle is a great deal more anatomically complex than a lot of people realize, which is why we’ll be looking at it in more detail today.

For example, did you know that the biceps muscle has two heads – The short head, and the long head? Do you know about the Brachialis? If not, then read on.

Before you even consider familiarizing yourself with the biceps, it’s imperative that you first understand what the brachialis is. Your brachialis is what is known as an elbow flexor, and it is located directly beneath your biceps muscle. This is very important because as it grows, it literally pushes your biceps upwards. This gives the impression that your arm is expanding, whilst making the bicep muscles appear taller.

Now that we know a little more about the brachialis, let’s now look at a few effective ways of hitting this particular part of your anatomy when you’re in the gym. When training arms, recruiting as many brachialis muscle fibres as possible is essential, which is where hammer curls become important. Hammer curls utilize a neutral grip and provide elbow flexion in the process. This is important because it helps to almost isolate the brachialis, rather than working the biceps brachialis which would mean less brachialis recruitment.

Hammer curls are to the brachialis what the bench press is to the chest.

Now that we’ve looked at the brachialis, let’s now look at the biceps. As the name implies, (BI-ceps) the biceps muscle has two primary heads.

These are known as the long head and the short head. Both heads of this muscle group originate on the shoulder blade, also known as the scapula, and they both end on the forearm. Your long head is located on the lateral aspect of your arm, whereas the short head is located on the medial aspect of your arm. To help make things a little simple, try to think of the short head of your biceps as your inner biceps, and the long head as your outer biceps. Between subjects, the physiological cross sectional area of the biceps muscle can vary.

Generally, experts have found that the long head does appear to display a greater physiological cross sectional area than the short head. Experts have also found that it is the short head of the biceps muscle that is considered the superior supinator when your forearm is in a neutral position, or pronated position. When your forearm is positioned in supination, your long head will become superior. 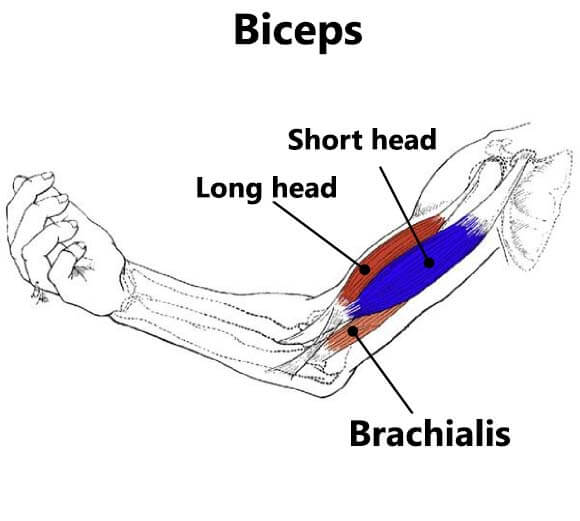 When most people train biceps, they generally just pick up a set of dumbbells, a barbell, or an EZ bar, and curl away, without knowing exactly which part of the biceps they are targeting. For casual gym-goers, this is fine, but for people with lagging biceps, this isn’t enough, as it pays to know what you’re doing. In order to target any muscle group effectively, the muscle in question must be fully contracted. In terms of the biceps, this means that elbows must be supinated and flexed fully in order to get the most out of your training.

You can actually target different heads of the muscle just by adjusting your grip slightly.

For example, if you are performing barbell curls with a wide grip, your short head will do more of the work. By switching to a narrower grip, however, you bring the long head into the equation. Different exercises work different parts of the biceps, so let’s go into more detail. You can even target different heads of the muscle by adjusting your elbow position. To target the long head, your elbows should be positioned further back, and to hit the short head, the elbows should be positioned closer to the front.

Tips about grip and elbows position are very important.

If you know them, you can easily choose proper exercises for each bicep head. 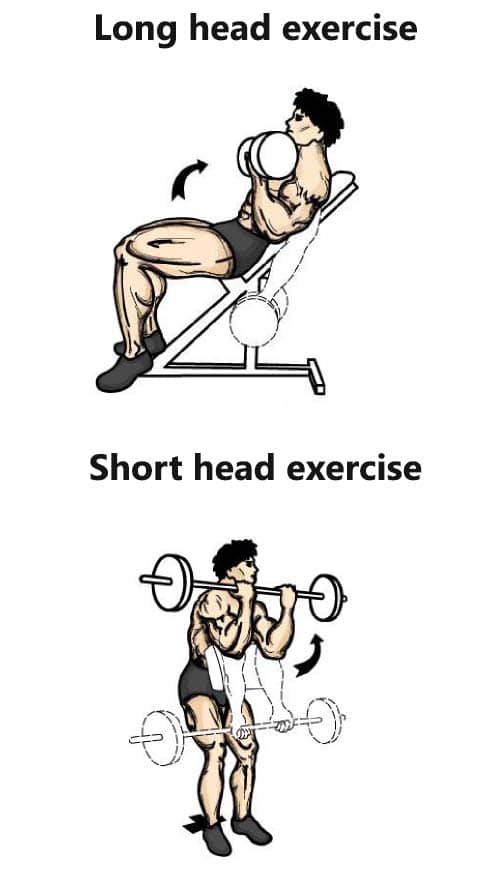 In order to target the long head of your biceps muscle, try performing the following exercises the next day you’re training your ‘guns’ in the gym:

Incline dumbbell curls are also ideal for working the long head of the biceps. Take a seat on a 45-degree bench with a dumbbell in each hand. Sit back, lower your arm,s keeping your palms facing inwards and slowly curl the dumbbells up into the air. Rotate your wrists as you do so and squeeze at the top of the movement. If you prefer, you can perform unilateral curls one arm at a time. 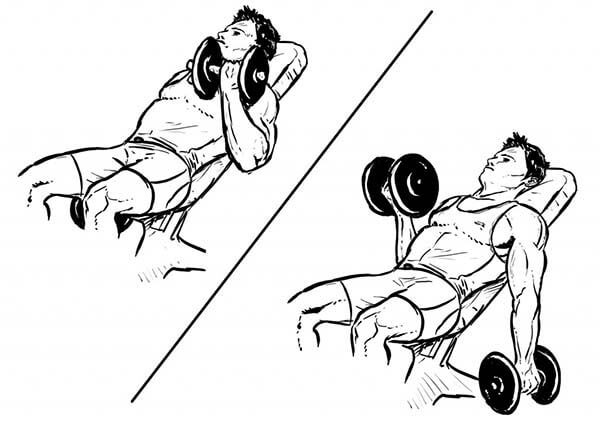 Barbell drag curls require you to drag the weight up your body rather than curling it, and it is great for working the long head of your biceps. Simply take a barbell, hold it at arm’s length and ensure your little fingers are both resting against your outer thigh. Slowly drag the barbell up your body and slowly allow your elbows to move backwards as you do so. Once the bar reaches your chest, hold for a second, and slowly lower it back down. You can also try this exercise in a Smith machine.

To target the short head of your biceps, try the following exercises:

Standing curls with an EZ bar are great for working the short head of the biceps. Simply take an EZ bar, hold it at arm’s length so that both elbows are resting roughly at hip height. Next, curl the bar upwards, bringing it level with your upper-chest. Hold for a second on the contraction, and lower it back to the starting position.

By simply performing curls using a shoulder-width grip, or possibly a little wider, you will recruit more of the short biceps head during the exercise. For that reason, when performing your favourite biceps exercises, if possible, go a little wider with your grip and your short head will thank you for it.

Preacher curls are great because they can be performed using a machine, a bar, or dumbbells. In terms of hitting the short head of the biceps, they’re ideal. To perform preacher curls, take a seat on a preacher curl bench whilst grasping a fairly light barbell or EZ bar. Your elbows should both be firmly on the bench, and your arms should be fully extended. Next, slowly curl the bar upwards and bring it up towards your lower jaw. Squeeze and hold at the top of the exercise for a second or two. Slowly lower the weight back down to the starting position and repeat as necessary. 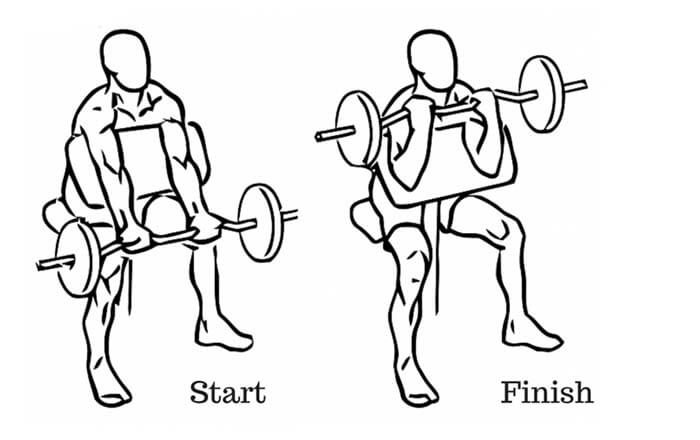 How often do you train your bicep long and short head?

7 Ab Roller Exercises for a Strong and Stable Core

3 Effective and Affordable Supplements for Fat Loss and Muscle Building