Every café or restaurant now seems to have a “healthy” alternative to their normal foods which includes some form of egg whites. Take McDonald(s) for example, they have an egg white delight which has 50 less calories than their normal egg McMuffin.

Now, new research coming out of the University of Illinois is looking at the impact on whether keeping the yolk in the egg is actually more beneficial for muscle building than egg whites alone.

What happened in the study?

Reported in the American Journal of Clinical Nutrition, researchers looked at whether keeping the yolk in the egg changed the effects on recovery compared with egg whites alone when total protein is matched.

10 men aged between 20 and 22, who were familiar with resistance training, engaged in a weightlifting session before being given either whole eggs or egg whites. Both doses contained 18 grams of protein, but the whole eggs totaled 17 grams of fat, too, whilst the egg whites had 0. The amino acid profile was matched in both cases as well.

The results showed that ingesting whole eggs immediately after resistance training caused greater increases in muscle protein synthesis than egg whites alone. Muscle protein synthesis is the process of your body repairing and building muscle tissue. Interestingly, other studies from the same laboratory have indicated that just adding a fat source to a pure protein source after exercise does not boost protein synthesis, meaning that there’s something special in the egg yolks. 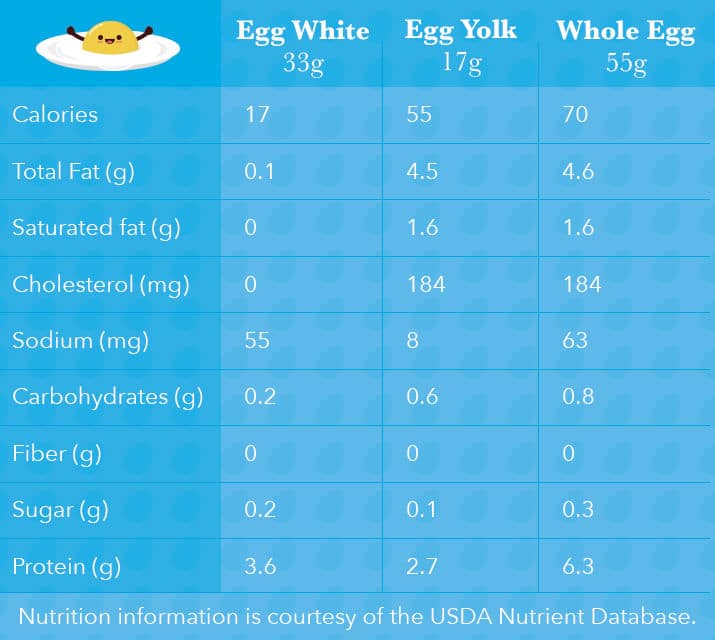 What can you take away from this?

So, should you throw away the egg yolks after exercise? Yes…and no. If your goal is to build muscle, then including the egg yolks does seem to have some beneficial effect over egg whites alone. The extra calories will also help you reach your caloric goal. Egg yolks also contain all the micronutrients (vitamins and minerals) inside the egg.

However, this doesn’t mean that egg whites are completely useless. If you’re cutting, egg whites are an incredibly lean protein source that can allow you to eat more fat and calories from other sources. As we’ve seen, the same amount of protein from whole eggs compared to egg whites includes 17 grams of fat or just over 150 calories.

Including the egg yolks isn’t the difference between making progress and staying where you are, but it can be a healthy way to increase your fat and caloric intake or hit your macros.

Eggs by the Numbers: How many calories are in two eggs?

Total Fat in Eggs – Everything You Need to Know

Net Carbs in Eggs – Are There Any?

From Chicken to Ostrich: How Much Protein is in 2 Eggs

Where the Gains Show the Most: Creatine’s Effectiveness on Both the Upper and Lower Body