Imagine how awful it would be to take out a manual and learn every time you wanted to drive a car? Instead, even after a couple of years without holding a steering wheel you can sit and drive.

Our brain is designed to save energy and automate actions, which we repeat over and over. And they become a habit…

Habits play an essential role in our lives. Like in a car-driving example, they allow you to do important everyday things without thinking and relearning. It allows you to do many things together at one time. Sometimes, habits can even save our lives.

However, not all habits are welcomed. These are habits, which we call – bad habits. They make our life harder, unpleasant, and in some cases, they destroy it completely. Usually, people want to get rid of bad habits, but it’s a very hard task. How many times did you want to quit smoking, eating too many sweets or biting your nails?

I’m going to give you a 4-step formula which helped many people around the globe to break bad habits.

Are you ready for changes?

Habits in our lives

Do you think it would be easy to start using a new video streaming platform instead of YouTube? I suppose many would feel very uncomfortable. And do you know why?

In fact, many everyday activities already are your habits and you don’t even realize it. You brush your teeth to get a movie-star smile, spray air freshener to again smell the Pacific or drink a protein shake to enlarge muscles. Some of these habits you created on your own while others are designed with help from external influences.

Businesses around the world invest boatloads of money in marketing campaigns to convince you to buy their products. One of the many, but very effective strategies, is to create a habit for the particular product or service usage. And it slowly and deeply infiltrates into consumers’ lives.

Our brain doesn’t care whether particular habits are good or bad for you. As long as we get rewards, we will use them. For this reason, if you want to break some habits, you must work with them really hard.

First up, let’s look at three key elements that form and govern our habits.

As you can see, these three elements are tightly connected and one can’t exist without other. For this reason, together they are called the ‘habit loop’. It is a widely-used term to characterize and analyze habits!

Later in the text, we will again return to this trinity! 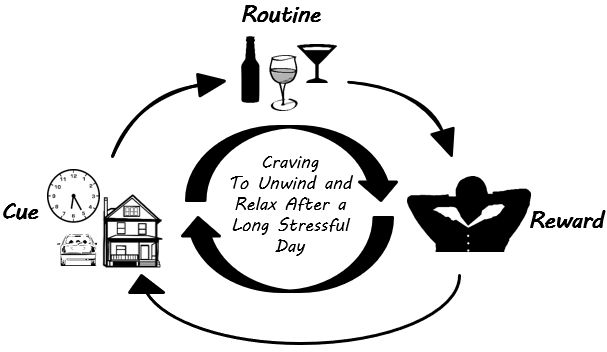 Example from an office worker’s life

I want to describe to you one habit example from an office worker’s life. It will make it easier to understand further practical recommendations for breaking habits.

Ariana is in her late twenties and started working for an accounting company two years ago. She usually gets up at 7 a.m. and arrives at work before 8.30 a.m. As an accountant, she works with different numbers and must be very accurate. Ariana finishes her work at 5 p.m. and goes to a local pizzeria to order a medium-sized pizza.

Actually, almost after every workday, she visits local pizzerias or cafes to have an energy-dense meal. After this kind of meal, she feels bloated and, what’s more, she has gained an extra 10 lbs. (20 kg) of fat over the past year. Now, she is unhappy about her appearance and addiction to eating too much.

Ariana wants to by-pass the cafe and pizzeria but she can’t! An invisible force is pushing her into open doors… She feels like an addicted gamer who can’t go to sleep until she gets to the next level. Ariana needs help…

Four steps to get rid of a bad habit

There is no magic bullet to get rid of bad habits instantly. You should understand that changes won’t happen overnight. It takes hard and dedicated work trying to overcome this yourself. Sometimes, people try many times until they break certain habits. Be disciplined! It’s much easier to give up than fight. I really hope you won’t be a quitter!

Find a bad habit which you want to break. When you select one, start to analyze it. During the first step, you should only determine routine – a real step by step action which you adhere to regularly.

It could be: going out during a break and smoking; every Saturday evening drinking too much booze, etc. In our example, it would be: Every day after work, Ariana goes to a pizzeria or cafe and orders an energy-dense meal.

Of course, you should describe your routine in more detail.

After you have clearly determined a routine, the next step is to experiment with rewards.

Habit is based on your craving for a certain reward, even if you don’t realize it yet. As a result, you perform some actions to attain them. The problem is that you have no idea what type of reward you are striving for. Rest easy, we are going to find it.

What exactly should you do?

In order to recognize reward, you should do an experiment. Replace your routine, which you determined in the first step, with another. Try out different routines. It could take some days or more than a week. Every fresh routine will bring a new reward. For example, instead of eating pizza after a workday, try to:

Each time you’ve tested a new routine, write down three things that you felt. Wait for 15 minutes and ask yourself, ‘Do I still want pizza?’ The goal of this experiment is to find a real reward for what you are striving for.

Sometimes, people eat pizzas and other junk food because after hard work they need energy in the form of sugar. In this case, having a chocolate and some fruit will give you the same buzz as a pizza. If strolling in a new place switches off thoughts of pizza and makes you happier, it could mean you want to change location and get new feelings. You are tired of only seeing your home and office.

I hope you get the point…. Start changing your routine and find a reward!

In everyday life, we are bombarded with information and different signals from the world outside. Some of them act like cues to our brain and kick-start a routine. Your task is to identify cues and keep them in mind. I know it won’t be quick and easy to find them. Luckily, they fall under five categories into which we can separate cues.

Next time you start craving certain things, describe your location, time and emotional state according to those five categories.

I am again craving for a large pizza…

Where am I? In my office.

How do I feel? I feel stressed.

Who is next to me? Tom from the Accounts division.

What was I doing before I started craving pizza? I was talking to Sue.

After a few days, you should analyze your answers. You will discover very interesting moments. For example, you crave a pizza between 4:00 p.m. and 5:00 p.m. and, especially, after you talk with your boss.

Finally, we’ve reached the point where you should create an action plan for breaking your bad habit.

By now you need to know:

Without knowing all those three components, it would be almost impossible to change a habit. I hope you did everything correctly, otherwise go back to step number one! 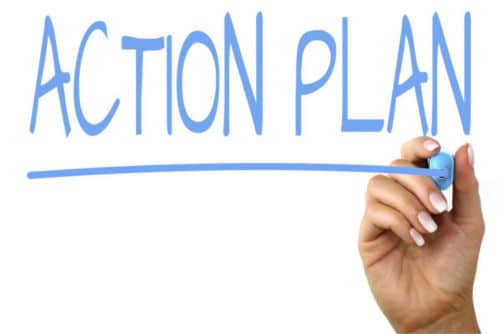 What you should do next?

Take a sheet of paper (or use a word processor) and divide it into three columns. Put a heading on each column: cue, routine, reward. Rewrite or copy in the information from steps 1, 2, and 3.

Now you can clearly look at the whole chain of events which formulate your habit. From our example, it could look like this:

In order to break your habit, you need to change or rather replace only one element – ROUTINE. Delete the routine and then write a new routine from step number 3. Try to follow it consistently so that it becomes a routine that gives the same reward as the old one. Of course, choose a routine which can’t harm your life in any way.

Don’t touch cue and reward, at least for now.

The formula to success:

For Ariana, it could look something like this. She already knows that the cue happens in the time between 4 p.m. and 5 p.m. on workdays and, especially, when she feels stressed. As a result, Ariana is craving for some carb-dense meal. She used to go to the pizzeria to eat something tasty and get a reward. However, today between 5 p.m. – 6 p.m., she will go to the shop to buy fresh and dried fruits. They will be as carb-dense as pizza but less fatty and calorie-rich. It will help her cut calories and start to drop body fat.

Final words – It’s not always going to be easy

Have you ever noticed when people start to exercise that after a while they change eating habits, quit smoking, and so on? One bad habit change can create the domino effect on other habits. It would be wonderful if it happened every time.

However, there is a dark side. Sometimes you can fail, or it would be difficult to achieve some progress without help from other people. Be ready to try and experiment with your habits many times. Don’t be afraid to ask other people for help. Even if you cut your bad habits in half, it will be a positive step towards better health, saved money, and a sharper mind.

Become a slave to good habits and your life will change for the better!

The Largest Muscles: Were We Wrong About Their Size?

How Protein Conquered the World

The Pros and Cons of Liquid Vitamins