Running is a very popular recreational and sporting activity. These days it’s not a surprise to see the internet oversaturated with articles, workout routines, and apps about running. Despite its popularity, I am not a huge fan of long distance running. However, sometimes I like to collect and study information about this kind of topic.

Recently I had a chance to listen to a very competent person – Louise Burke – during a webinar regarding marathon nutrition. Louise is a sports dietitian from Australia. She has over 35 years of experience in the education and consultation of top athletes, including the Australian Olympic Team.

Today I’m going to share with you some takeaways which peaked my interest while I was listening to this webinar.

I really hope that this information will help you to improve your results.

1. Can we run as fast as elite athletes?

Sporting goods producers Asics’ team, right on the streets of NY, set up specially designed, treadmills. They allowed regular people to test how long they could maintain elite marathoners’ running pace at 12.4 MPH (20 KPH). Oh! It wasn’t a surprise that even maintaining that kind of pace for a couple of minutes was extremely challenging. Actually, if someone could do that for long as only 5 min, it was a great result.

This trial test shows us how much training and endurance is required by elite athletes to achieve such unbelievable results during a race. Regular people are a long way from such results. To achieve something like that you must work very hard for many years and, of course, have a bit of talent.

Don’t try to repeat this experiment in your gym. You can hurt yourself!

2. Carbs should be your best friend

As bodybuilders show devout adherence to protein, so too, serious runners should monitor their carbs intake. During long-distance running, carbs provide the bulk (around 85%) of the necessary energy for top marathoners. However, normal levels of accumulated carbs can provide fuel only for 20 miles (32 km) top-speed running.

For this reason, athletes and coaches are seeking the ways to store up more carbs in the form of glycogen in the body.

Let’s look at two popular and proven methods which are preferred.

First up, many fit athletes are familiar with the term ‘carb loading’. The idea behind that is when during the final week prior to race, athletes sharply increase their carb intake. This allows replenishing and depositing extra carbs in muscles. Now, an athlete’s body is saturated by carbs and ready to help maintain high running pace till the end of a race.

Different carb loading protocols co-exist and athletes must adapt them to their specific needs.

First experiments regarding carb loading are dated back to the 1960s in Scandinavia. Even in those days, athletes noticed that low carb reduced, but high carb diets increased exercising capacity. They designed the first carb loading protocols, which consisted of 3 days very low carb intake followed by 3 days of very high carb intake.

It could look something like this: from Monday to Wednesday – low carb diet; from Thursday to Saturday – high carb diet and no training on Saturday as well; on Sunday – competition.

In the 1980s, the carb loading protocol was updated. The researchers replaced low carb days with a normal/moderate carb intake, which followed by 3 days of very high carb diets. They find out that carb intake depletion is unnecessary because it makes athletes too exhausted and doesn’t provide any benefits.

Nowadays there are studies that offer other carb loading strategies. They suggest boosting carb intake only for one day! In this case, the athlete, according to his experience can even choose which of the days prior to race it will be. As you can see, it’s very flexible and easy to implement. However, many athletes still favour 3 day carb loading.

Another very popular question is what kind of carbs are better suited for loading. In most cases, low fiber (residue) should be preferred. Some examples of low fiber carbs are white bread, pasta, white rice, marshmallows and other sugar-rich foods.

Next, to boost up your energy levels is by race carb supplementation. It’s when you grab and eat/drink extra carbs while you are on the move. Usually, such an approach should be preferred for long-distance races, which last at least 2.5 h. Recommended carb dosage is around 80 – 90 g/h (there also exist other loading protocols with lower and frequent doses).

You don’t need to prepare some super foods on your own. There are many different ready-to-use concentrated drinks and special sports products on the market.

Although those two methods sound so fantastic and even simple to implement you should be cautious. Mainly, because sometimes they are too aggressive and more appropriate for seasoned runners. If you are absent from running and dieting experience, you should look at them very carefully.

Firstly, I suppose you’ve seen those unpleasant scenes when an athlete starts to vomit in the middle of a race. In fact, not everyone’s guts are ready to absorb such huge amounts of carbs without long-term practice. It is especially difficult for women and dehydrated individuals. Food absorption capacity can be detrimental to your further progress!

Luckily, there are some tips on how to train and increase your gut absorption capacity. For instance, training immediately after a meal; increasing carb contents of the diet; training with carb intake during exercise. Of course, every new change should be implemented gradually.

Our body fat stores a large amount of energy. Even very lean individuals have enough fat which can provide much more energy than carbs do. Sports nutritionists and coaches always look for the new methods on how to pull out this bulk of fuel and push it right into the athletes’ muscles. One very common tip which frequently pop-ups is to adhere to high-fat low carb diets. You can find a countless number of books, articles, and videos regarding this topic. They state when you reduce carb intake your body, in the absence of sugar, shifts to the body fat as a primary energy source. It sounds logical. However, despite popularity and coherence, not everything is so promising.

Louise Burke along with other colleagues conducted a 3-week study to examine low carb Vs. high carb eating-plan impact on the performance of race walkers. Accordingly, they separated participants into three groups: low-carb; high-carb; alternate between low and high carb intake. The researchers analyzed many outcomes. Indeed, they discovered and approved the fact that low carb diets encouraged the body to burn more fat as the energy source. However, in spite of this, the high-carb diet group achieved better performance. For this reason, we can still conclude that serious endurance athletes should stick to the high/moderate carb diets.

Oldie but goodie. This statement seems very true when describing caffeine. Athletes have been familiar with it for a long time. Even branded supplement producers add caffeine to the wide range of their products as one of the key ingredients.

Caffeine helps to achieve fatigue resistance, increases attention and alertness. In addition, caffeine doesn’t cause dehydration as was thought previously!

It’s broadly advised for endurance athletes and other sportsmen as well. If you want to invest money in some supplements, than caffeine is a good bet. Similarly, with other supplements you shouldn’t expect miracle results. It seems to me that caffeine could improve your performance by 3 % on average. Some individuals might feel side effect of caffeine intake! 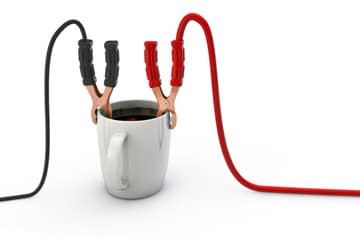 There used to be an advice of 6 mg/kg caffeine intake to boost energy levels during competition. However, more recent recommendations suggest that benefit could probably max out at only 3 mg/kg dosage. Some of you might start to count how many cups of coffee you should drink to receive this amount. But don’t hurry yet! Yes, coffee can energize you but it will be complicated to be sure about how much caffeine you really got. Caffeine contents vary from one sort of coffee to another! The easier way to control caffeine intake is to use some forms of supplements.

When is the better time for intake?

Actually, you should test different intake protocols: pre-event; during event; towards the end of event. The last one is very popular. Maybe you should stick to that and only take caffeine when you start to feel exhausted.

And finally, please be aware that caffeine isn’t in the banned substances list in the country or federation in which you plan to participate. Some individuals might feel side effect of caffeine intake as well!

A goal without a plan is just a wish. To put all things together you need a race and nutrition plan. Describe all necessary steps and preparation to successfully complete competition. The plan could include sections like: nutrition; carb loading; water intake before and during event; supplements; some possible barriers which could interfere with achieving goals and how to deal with them; what to do before and after the race, etc. Don’t panic if your first plan doesn’t work as you expected. After gaining competition experience you will start to better understand how and when to do certain things to beat your records.

Creatine, Proteins & Gainers: What to Choose and When to Choose It

Can You Spot Reduce Fat?

Lose 10 lbs in 7 Days with an Extreme GM Diet

3 Effective and Affordable Supplements for Fat Loss and Muscle Building