When it comes to training in the gym, the shoulders are one of the most neglected body parts on the human anatomy, and that is such a shame. A set of rounded shoulders can really add the finishing touches to an already impressive and aesthetic physique.

They can help create the illusion that the individual in question has a larger upper-body than they actually have.

The problem is that people simply do not spend enough time training the different parts of the deltoid, and then wonder why their shoulders aren’t growing as they should be.

When it comes to training the deltoids, first and foremost, it is essential that you know how to do shoulder press exercises and the different variations available. Shoulder presses are incredibly beneficial for achieving a set of boulder shoulders, though they certainly aren’t the be-all and end-all of shoulder training. Here, I’ll be taking a more in-depth look at training shoulders.

I provide you with a definitive shoulder training guide. Take a look and see what you think.

A quick look at your deltoids

When most people talk about training shoulders, generally speaking, they probably don’t pay much attention to which parts of the shoulder muscle they are actually training. In reality, however, to achieve a well-rounded set of shoulders, you must work all three parts of the deltoid. These three parts are: 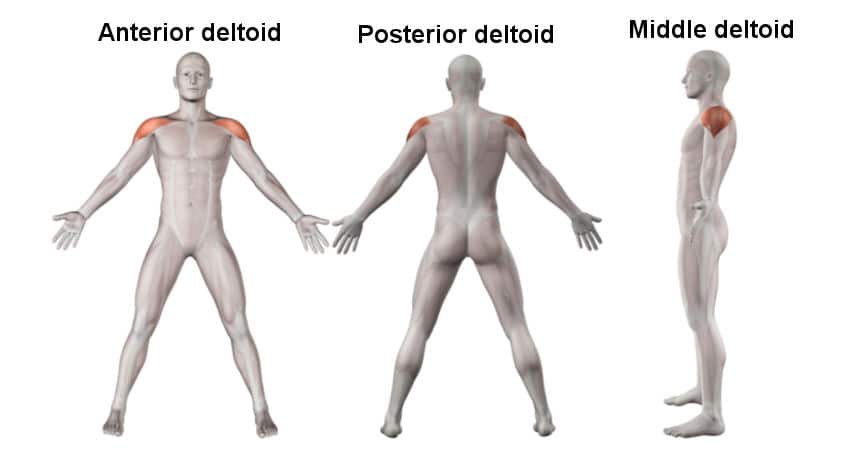 Rotator cuff injuries as mentioned, are very common, though they can easily be avoided as far as training the shoulders is concerned.

The key to huge and symmetrical deltoids

If you feel that your physique is lacking, it could be your deltoids letting you down. Knowing how to do shoulder press exercises and variations is, as mentioned, very important, though there is a great deal more to training the deltoids than just that.

Developing the deltoids means that you should work all three heads of the muscle equally, and that’s where people struggle. Most gym-goers who take their training relatively

Developing the deltoids means that you should work all three heads of the muscle equally, and that’s where people struggle. Most gym-goers who take their training relatively seriously, will often find themselves with poor rear delts, average middle delts, and well developed front delts. This can cause the arms and shoulders to look far less impressive than they should be looking.

In an ideal world, you want all three parts of the deltoids developed equally, as that way the delts will look great from all angles, and will look symmetrical and aesthetic in the process.

The importance of shoulder pressing for training shoulders

When it comes to shoulder training, there are several tried and tested exercises that are commonly performed amongst bodybuilders, though generally, two of the most common compound exercises are: upright rows, and shoulder presses. Upright rows can be performed with EZ bars, barbells, or dumbbells, and are effective shoulders exercise.

I advise you to perform upright rows only to chest level. It will be safer for rotator cuff muscles.

What are shoulder presses?

Shoulder presses are pressing movements designed to target the deltoids. There are a number of different shoulder press variations to choose from, and best of all is the fact that each variation will target a slightly different part of the deltoid itself. Shoulder presses can be performed on machines, with barbells, with EZ bars, with dumbbells or Kettlebells.

They can be performed either seated, or standing, and they are incredibly effective. The problem however, is that, although relatively simple to perform, there are many people out there who are simply not performing these exercises in the correct way.

The importance of correct form

To some, shoulder press exercises are very simple, because you simply grasp the weight and press it above your head. Easy, right? Well, no, not exactly. In order for you to target the correct parts of the deltoid muscles, you must ensure that you are utilizing perfect form.

An incorrect grip will not only render the exercise far less effective, it could also put you at risk of injury. Elbow placement is also important because if you have them too far forward, or too far behind, again, the exercise won’t work. If using a barbell, you want your elbows almost completely underneath the bar, rather than too far in front or behind.

One of the most common variations of the shoulder press is the seated dumbbell shoulder press. To perform this exercise, individuals will take a manageable dumbbell in each hand, and will sit down on a bench with the back straight up, raised behind them.

They will then engage their cores so they don’t slouch, and will create a solid base by firmly planting their feet on the floor. Next, they should carefully raise both dumbbells up so that they are at shoulder height or higher (if you want to feel safer about your shoulders).

Palms facing straight in front with an overhand grip on the weights. Both dumbbells should be slowly pressed upwards into the air until the arms are almost completely extended. At the top of the movement, the individual should hold for a second as the muscles contract, and they should slowly return the dumbbells to the starting position. They should then repeat for as many reps as required. 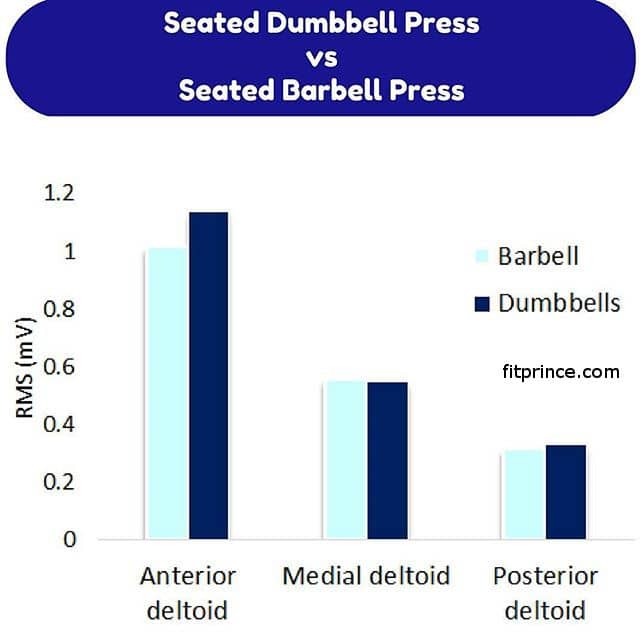 Believe it or not, but studies have found that standing dumbbell shoulder presses are in fact even more effective than seated variations.

The problem however, is that when alone, getting relatively heavy dumbbells off the ground and into the starting position can be difficult. This is why it is best to go with comfortable weights when performing standing dumbbell shoulder presses.

Standing variations are performed in exactly the same way as seated ones, except for the fact that you are standing up, and are therefore engaging your stabilizer muscles and placing a much heavier load on the deltoids.

If performing a standing dumbbell shoulder press, always choose a fairly comfortable weight and instead, focus on getting more reps, as opposed to more weight. Never try to muscle up heavy dumbbells because you are just asking for back and/or shoulder injuries. 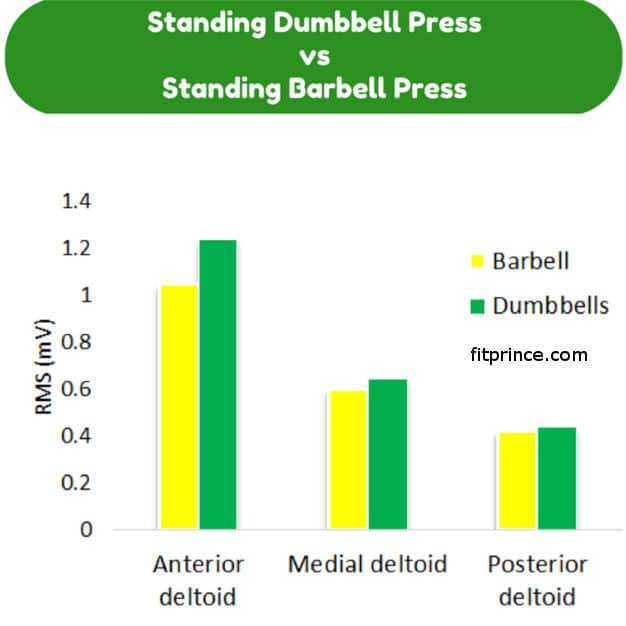 With this exercise, you can use a heavier weight, without putting extra strain on your joints. When performing this exercise, it is important that you do not perform what is known as a ‘push press’ which is when you generate power from the legs and push the bar into the air. Instead, your power should be coming from your core, your hips, and your arms.

You must ensure your forearms are perpendicular to the ground, and you must ensure you squeeze from the hips as opposed to the back. Raise the bar into the air, hold at the top. Slowly lower it back down to the front deltoid so that your elbows go deeper than 90 degrees. 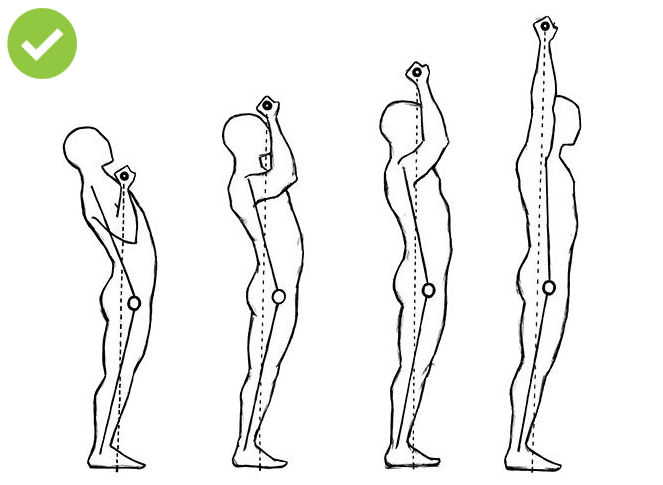 Make sure not to hit your chin or nose on the way down. Most people fully extend their arms, though some don’t fully straighten them. There is evidence which does suggest that this helps keep better tension in all muscles during the movement. You can try both variations.

Which is your favourite shoulders exercise?

The 10 Best Alternatives to the Classic Push-up

The Struggle is Real: Disadvantages of Being a Bodybuilder

Press-up vs. Push-up – Is There a Difference?