The ab wheel is a tried and true method for building strength and size in the abdominal muscles. If you’re serious about your core strength, then I suggest to implement the ab wheel in your training.

The ab wheel challenges the core in a way unlike any other. Not to mention, the ab roller puts you in positions similar to many weightlifting movements which means that you’ll become stronger in many of your other lifts. The ab wheel isn’t just a way to make your abs look better, but to get your whole body to perform better.

Despite all of this, the ab wheel isn’t the easiest movement to get into. This means that a lot of people tend to shy away from this important piece of equipment as they don’t believe they’re strong enough. The following 7 movements are listed from easiest to hardest; going from an exercise almost everyone can do to a movement only the best of the best will be able to perform. This means that you can continually challenge yourself with your ab training to continually make progress and make long-term continuous progress.

Starting with the easiest movement, the knee roll out is similar to doing a plank push-up. By starting on your knees instead of your feet, you shorter the lever length and therefore, reduce the strain placed on your muscles.

Start on your knees whilst grasping the ab wheel against the floor. Engage both your abs and glutes and roll out as far as you can go before coming back to the starting position. Your spine should remain in a neutral position throughout the entire movement. Gradually try to increase the degree to which you can lower your body until you’re full extended in the full range of motion. 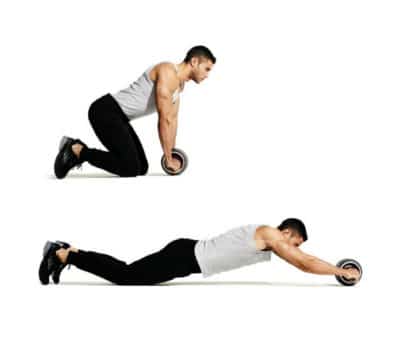 The wide-legged roll out is the next step up from being on your knees. By separating your legs you create a more stable base which you can then slowly bring together as you become stronger.

Begin with your feet placed slightly wider than hip width apart and the ab wheel placed in front of you. Grasp each of the handles, engage your abs and glutes, and then raise your body off the floor. Keeping your back straight, roll as far forward as you can and then roll back. 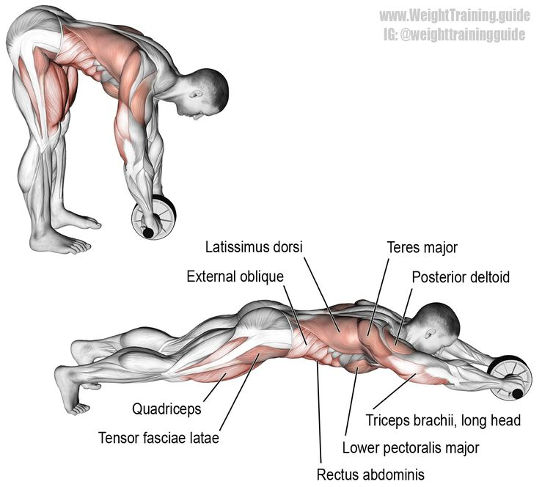 Once you can comfortably roll all the way out with a wide stance, the next step is to bring your feet together to reduce the stability and challenge your abs more.

The narrow-legged roll out is the same movement as the wide stance apart from your feet are placed together. Once again make sure to engage your abs and glutes to keep your spine stable throughout the movement.

To create the ultimate amount of instability at the base of the movement, reduce yourself to a single-leg limits the surface area you have to rest against.

As with the narrow-legged roll out, the single-leg roll out is the same as a normal roll out except that you raise one leg off the floor. Complete the same amount of reps with each leg raised.

The plank is a challenging movement on its own, but by adding in the ab wheel you increase the instability of the movement and therefore, the degree to which your core muscles are engaged.

Start with your feet placed together the same as in the narrow stance roll out before raising yourself off the ground and holding yourself in this position. Make sure to engage your entire body to keep yourself rigid. To make the movement harder, you can roll the ab wheel slightly out in front of you opposed to directly under your chest.

The Y-roll out hits your oblique’s (the muscles on the side of the torso) to create that V-shape associated with strong abdominal muscles.

Complete a normal narrow-stance roll out except with each rep aim to roll yourself off to one side and then the other.

Heeled roll outs actually involve rolling with your feet opposed to your hands to create more engagement in your upper body and lower back. However, you will need the foot strap attachment to keep your feet locked in.

Strap your feet into the attachments and start in a normal plank position. Bring the ab wheel towards your chest whilst keeping your entire body engaged before rolling them back behind you.

The Best Dumbbell Exercises and Workouts for Your Lower Back

For the gym newbie

Triceps – The Secret to Big Arms