It isn’t hidden from us that muscle building athletes sometimes become victims of banned substances like anabolic steroids, and growth hormone in order to build their muscles as per their wishes and passion. Who can forget the renowned cyclist, Lance Armstrong, who admitted the charges slammed on him, for doping? When you’re a sports person, you need immense strength. Not only professionals, but even athletes at an amateur level resort to such ‘outlawed’ habits to boost their energy levels. For obvious reasons, no one admits doing the same thing. You’ll hear most sportsmen and athletes saying, “I only drink protein shakes, have a little rice with meat, two eggs, sliced cucumbers…”, but how far is that the truth? Remember, we are not judging the sports persons; after all, it is up to them, and it is their choice whether or not to use the performance-enhancing drugs. One of the most common substances detected for doping is the use of AAS or Anabolic Androgenic Steroids. So what is AAS exactly? AAS  are synthetic derivatives of the male hormone testosterone. Now testosterone is a hormone that is produced in a man’s testicles, and also found in the ovaries of women in a smaller quantity. Testosterone increases strength and also helps to build muscles. This is the primary reason why AAS is so popular in spite of the ban on its usage and the number of side effects that it brings along with it. If you are a person who trains for fun and good health, you do not require AAS at all.

The dissimilarities between training with and without AAS has long been debated. In the light of this topic, I’d like to share information about a scientific study that specifically highlights this issue. The objective of the study was to reveal how the muscle mass and strength changes, with and without the use of AAS. For this purpose, 43 male amateur athletes who had trained in a gym were selected, and they were put into four groups. The first group consisted of men who neither trained nor used AAS. The second group consisted of men who didn’t train, but consumed AAS. The third group had men who trained, but did not use AAS. Lastly, the fourth group’s men not only trained but also used AAS. All the groups had to follow the same diet, and the third and the fourth group had to pursue a similar workout program. After observing all the 43 men for a full 10 weeks, the results were finally given a rundown. Here I will tell you about only two results, that will provide a brief overview of the findings.

One must not forget that only inexperienced athletes participated in this research study. Well, the first group (NO AAS- NO TRAINING) show also little growth in muscle mass, because they had sort of recovered from the workouts they had done before this study. The second group (NO TRAINING- USED AAS) showed significant growth in muscles. You should not assume that just by lying comfortably at your home with a beer in one hand and chips in the other, you can grow muscles. NO! Some experts reveal that growth in muscles by taking AAS and not working out is only possible at the initial stage. It doesn’t apply to all. If we look at all the possibilities, it is clear that one can significantly increase muscle mass and strength, with training and usage of AAS simultaneously. 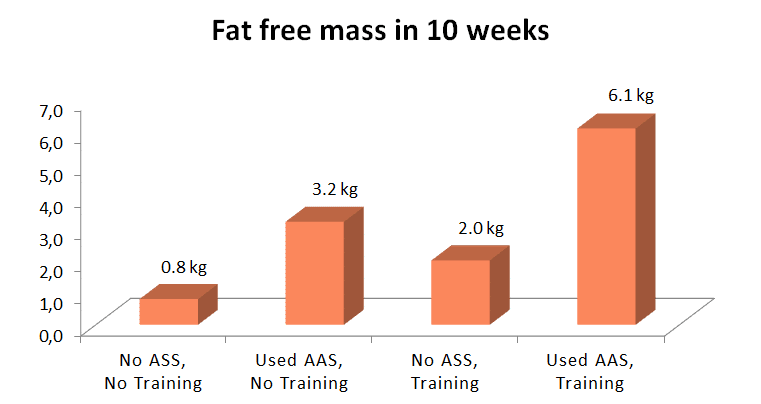 The result stated above is very practical. That is, with no AAS or training, you gain ‘zero’ kg, and with AAS and training, you get maximum results. It is interesting to note that group 2 (NO TRAINING- USED AAS) and group 3 (TRAINING- NO AAS) showed the same results. Strength was assessed on the basis of the maximal weight lifted for one repetition during the bench-press and squatting exercises. 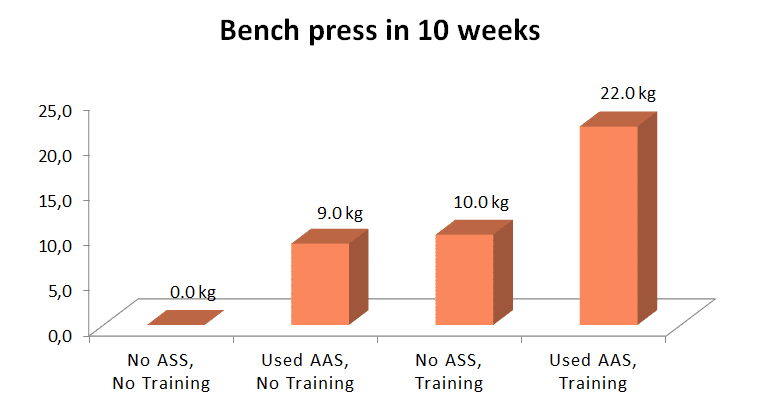 When you combine a workout with AAS, you’ll show greater progress in your athletic career. Did you know there are many workout routines mentioned over the internet, and magazines that are specifically built for people who takes AAS? So it is almost established that if you do not take drugs while training, you will not show much advancement. However, that doesn’t mean you should fall prey to such unfair means. You should look at alternative routines whereby you do not have to take such drugs. Stop comparing yourself with people who take AAS. You are unique, okay? Don’t hunt for reasons for not going for training as well. You’ll be surprised how much you can achieve without the use of AAS.

Work on your habits and yourself. Take care!

The Effects of Supraphysiologic Doses of Testosterone on Muscle Size and Strength in Normal Men. http://www.nejm.org/doi/full/10.1056/NEJM199607043350101#t=abstract

Push-up Grips: The Pros and Cons of Adding Them to Your Equipment