Often heralded as the king of lower body exercises, the squat should be a staple of everyone’s exercise routine. Whether you’re looking to build muscle, lose fat, or just simply improve your fitness capabilities, the squat is a fantastic movement for almost every goal.

However, continually doing the same movement over and over again can get a little boring. Also, sometimes you need to shake-up your training every now and again to bust through a plateau. This means you need to think a little outside the box to variations on the classic bodyweight squat to bring back some energy to your workouts and possibly discover a new movement you enjoy.

Here are 14 of the best bodyweight squat variations for you to try.

Starting at an advanced level, the pistol squat requires a lot of leg strength as you’re essentially doing the full squat movement but using only one leg. Not everyone will be able to do one of these, but you can easily work up to them by training your legs frequently and by using progressive movements such as the single leg squat.

To complete the pistol squat, extend one leg out in front of you and lower yourself down until your hip is in line with your knee. Then push back up and repeat on the other leg.

To complete a single leg squat, simply put more weight on one side of your body whilst raising the opposite foot’s heel. The more weight you can place on one side, the closer you’ll be to getting a pistol squat. 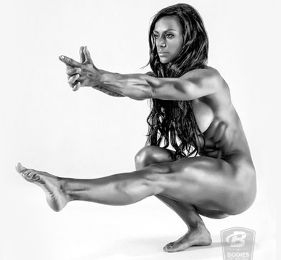 Is there one particular part of the standard squat movement that you find difficult? If so, partial rep squats are fantastic for focusing in on this point and training it in isolation. For instance, if you find the bottom portion of the movement the most difficult, then you might just complete that part for reps.

Pulse squats are fantastic for really getting a burn in your thighs and glutes. To complete a pulse squat, simply squat down into ‘the hole’ and bounce up and down in this area. You want to take your hips from slightly lower than knee level to just above. No higher and no lower. It doesn’t take many reps for you to really feel the strain with this variation.

Chair squats take the elastic response out of the squat. The chair squat simply involves sitting onto a chair or a box, waiting for a second and then standing back up. It can be easy to use the seated position as a rest so make sure you only wait for one second before standing back up. This means that your muscles have to work harder as they can’t gain power or speed from the elastic response in the bottom portion of the lift.

This is another way to bust through a sticking point. Once again, if there’s a particular portion of the lift that you have difficulty with, then the squat hold can help you to overcome it. Simply work out the position that you find to be a problem and then hold yourself in that position. Stop the hold when you’re 5 seconds away from failure, rest for 2 minutes, and then go again.

A favorite among skiers, the wall squat will really challenge your quadriceps and is a great way to build up isometric strength. Place your back against the wall and slide down so that your knees are in line with your hips. In the same fashion as the squat hold, remain in this position until you’re 5 seconds away from failing, then rest for 2 minutes and repeat once more.

The jumping squat is fantastic for improving both your strength and power in one movement, making it the perfect progression after the normal squat becomes too easy.

The jumping squat is exactly as it sounds. Complete your normal squat, but instead of coming back to a standing position, launch yourself into the air so that your feet leave the ground. Try to push yourself as high as possible into the air in order to get the most out of the movement. Land with a slight bend in your knees and return to an upright position before completing the next rep.

The sumo squat targets your glutes to a higher degree and takes some of the strain away from the calf and quadriceps muscles. As one of the functions of the glutes is to externally rotate the leg, beginning the movement in this position switches them on from the start.

The sumo squat involves simply taking a wider stance with your feet pointed diagonally away from you. Squat down until your upper leg becomes parallel to the floor, then push back up into a standing position. Make sure not to let your knees cave inward and keep your glutes engaged throughout each repetition.

Deriving its name from inmates’ workout routines, the prisoner squat stops you from swinging your arms and gaining momentum in the concentric portion of the lift. By placing your hands behind your head, you also force your upper body to remain upright. If you’re struggling to learn the correct form for the squat, then the prisoner squat can make for a great addition to your routine.

The prisoner squat simply involves placing your hands behind your head with your fingers interlaced, and then completing a normal squat. Make sure to maintain a rigid torso by engaging your abs and lower back throughout the entire movement.

Plie squats are very similar to sumo squats, except the toes are turned more outwards. You also hold your arms out in a ‘T’ position as opposed to having them by your side or inwards. This helps your balance and can be a great alternative for those who find the sumo squats too challenging.

To complete a plie squat, start with your legs stretched as far as possible, making a triangle with your legs and the floor. Then squat down as far as you can go. you may need to bend forward slightly, and then push back into a standing position.

Notorious for creating serious DOMS (Delayed Onset Muscle Soreness), the Bulgarian split squat is not for the weak. It heavily hits both the quadriceps and glute muscles, and by isolating a single leg at a time it’s brilliant for training towards the pistol squat.

Elevate one leg behind you on a bench, box, or bed with the front of your foot against the surface and your ankle just off. Jump forward to bring your front leg just slight in front of you, then lower yourself as far as you can go before pushing back up. You can lead forward if you need to balance as well as holding your arms out to either side.

The Hindu squat was developed to give you a full body workout in one move. As a lot of emphasis is placed on the breath, it’s also extremely relaxing and so is perfect at the end of your workout as a cool down or to wind down.

The Hindu squat begins by standing with your arms stretched out in front of you. As you squat down, sway your hands behind your back so they’re pointing behind you as much as possible at the bottom position. You then reverse this movement as you stand back up. They can be done slow and controlled to relax and unwind or fast paced to improve your explosive abilities and power.

Rolling squats help you to build up momentum to have more speed for the movement, but also force you into an extended range of motion as you’re starting from the complete bottom of the movement.

Start in a standing positon, squat down, and then roll backwards until your shoulders are against the floor. Use this momentum to roll back forward, place your feet against the floor, and then stand back up. Try to complete each rep as fast as possible for a workout that’ll challenge both your muscular and cardiovascular system.

Don’t be fooled by the name, this variation on the classic squat is extremely challenging and places further emphasis on the quadriceps muscles on the front of the thigh. It was first developed as bodybuilding was growing in popularity around the 1960s and has remained a staple of many routines ever since. If you really want to burn yourself out, do these at the end of your workout to failure. 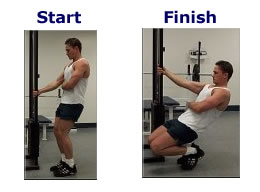 To complete a sissy squat, start next to a wall or bar, anything that you can grab hold of, with your feet placed about shoulder width apart. Hold onto the bar or surface next to you slightly higher than hip-level in order to keep balanced throughout the movement. Next, maintaining a straight line from your shoulders all the way down to your knees, bend your knees and push them in front of you. As you do this, lean backwards. Your heels should come off the floor but both the balls of your feet and toes should remain firmly against the ground. Finally, return to the standing position with your heels against the floor and legs straight before completing the next rep.

Which is your favorite squat variation?

The Slingshot Bench Press: Improve Your Result by 50 lbs

Low or High: How Many Reps Faster Increase Muscle Hypertrophy?