When people talk about training chest, there are many popular and effective exercises. Two examples are: push ups, and bench presses. However, which is the more effective of the two? As the saying goes ‘there can be only one winner’ which is what we’ll be aiming to discover right now.

Whilst push ups use nothing but your own bodyweight for resistance, they are generally considered one of the best compound, chest-based exercises you could wish for.

Bench presses however, and the different variants, also meet the same criteria, with the added bonus. They’re able to increase resistance by simply using more weight.

But which ones build the most muscle?

Which ones target the chest most effectively?

And which ones are the safer of the two?

Well, to answer all of that, let’s take a more detailed look at push ups and bench presses. We aim to determine which is the most effective exercises for targeting the pectoral muscles.

Push ups are exercises performed from a prone position, where the individual performing the exercise will begin with their arms fully extended just wider than shoulder width, and their upper body is held in the air.

They then slowly lower their upper body to the ground by bending the elbows, bringing their chests as close to the floor as possible. From here, they straighten their arms and bring their upper-body back into the air, and repeat for as many reps as required.

Standard push ups – The standard push ups that we all know and love result in great activation in the sternocostal portion of the pectoralis major (chest muscle), whilst engaging the abdominal muscles.

Narrow push ups – Usually gym goers think that wide push ups activate the chest muscle. Actually, it doesn’t. By performing push ups with a narrow hand position, bringing the elbows closer in to the body, more emphasis is placed on both the chest and triceps!

Swiss ball push ups – By performing push ups with either the hands, or the feet, on a Swiss ball, studies have revealed that the pectoralis major was not influenced via surface stability. Triceps and abdominal muscles showed slight increase in muscle activation when the hands, rather than the feet, were placed onto an unstable surface. For newbies, muscle activation will be greater than for experienced users while performing exercises on a stable surface.

Suspension push ups – Experts also revealed that push ups when performed from a suspended position, did yield far greater levels of muscle activation, and therefore hypertrophy, than standard push ups from prone positions. This is because the suspended position allows for a far deeper stretch. 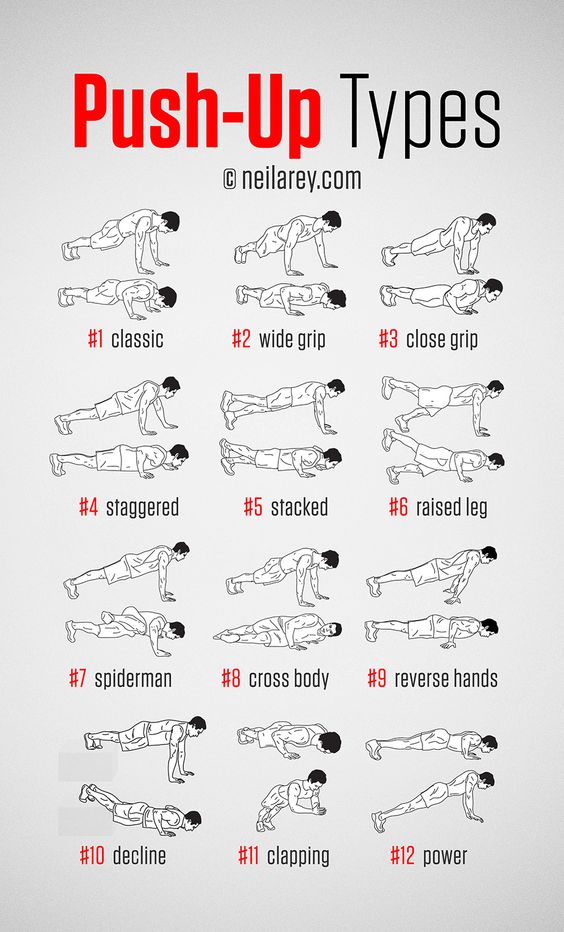 What are the advantages of push ups?

Some key advantages of push ups include:

Convenience – As push ups are bodyweight exercises, they can be performed anywhere, without the need for gym equipment. This helps save time and makes life much easier.

Can be adjusted as needed – Another great thing about push ups is that there are so many variations to choose from. As you’ve already seen. For example, to help better isolate the chest, push ups can be performed from an elevated position, i.e, between two benches, as this will allow the individual to drop deeper and get a deeper stretch in the pectoral muscles. Elastic band push ups can even produce similar strength gains as a bench press. 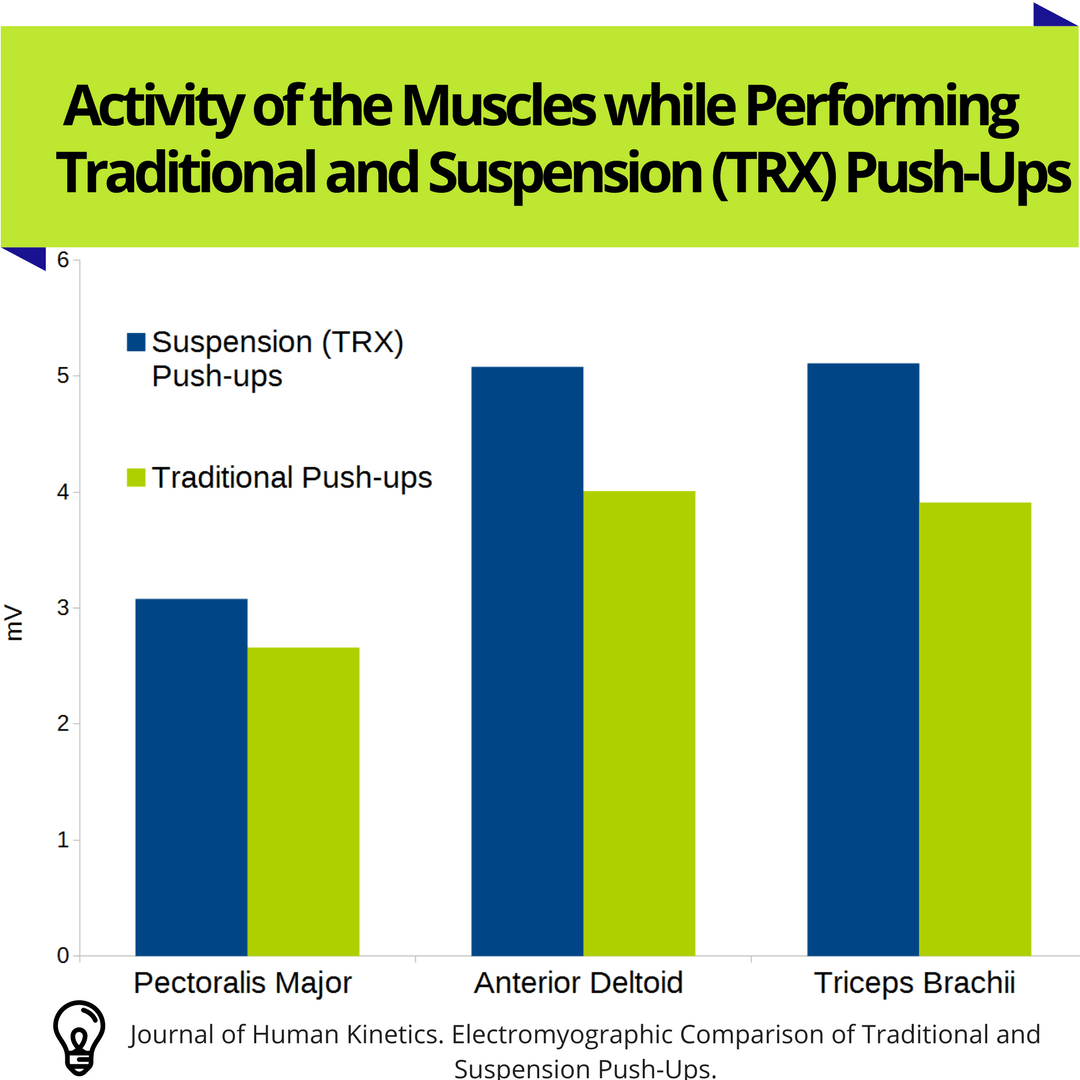 The bench press is one of the most popular exercises performed in the gym, and is certainly synonymous with the pectoral muscles. Bench presses can be performed using a barbell or dumbbells, and can be performed using a flat bench, an incline bench, or even a decline bench. The exercise is performed by using a barbell, or set of dumbbells, and beginning with the weight held elevated in the air above the chest, with the arms near fully extended. The weight is then slowly lowered downwards until it stretches the chest, and is then slowly pushed back into the air, and the movement can then be repeated as necessary.

What are the key benefits of bench presses?

Some of the main bench press benefits include:

Effectively work the chest – Though still compound exercises when free weights are used, bench press variations allow for better targeting of the pectoralis muscles as bench equipment is used to assist with stabilization. This means you can isolate the chest muscles more effectively, which will result in greater levels of muscle hypertrophy.

Target different parts of the chest – Another key benefit of bench presses is that you can target different areas of the chest by performing different variations. For example, flat bench presses will target the middle pecs, incline works the upper pecs, and decline presses work the lower pec muscles. By periodically including all three variants in your routine, and switching things up, you can easily attain an aesthetic, symmetrical, and muscular chest.

Build pushing strength – Whilst push ups can help build upper-body strength, studies have found that bench press variants are more effective, because you can progressively overload and increase the resistance by increasing the amount of weight being lifted.

Due to errors regarding the prediction of bench press 1RM, push ups cannot be used as viable predictive methods for predicting overall upper body strength. In fact, the results of a multiple regression analysis actually revealed that bench press absolute endurance was more effective for predicting bench press strength than push-ups.

Which provides the greater amounts of muscle activation?

Different exercises are of course designed to target different muscle groups, but which of the two have been found to provide the greatest levels of muscle activation. Well, if we’re talking about overall muscle activation, it is the push up that is the most effective, as performing the exercise will recruit multiple muscle groups from all over the body.

So, which is the better exercise?

In terms of chest-specific exercises, if you had to choose just one exercise, the bench press does appear to be slightly more effective for working the pectoral muscles. This is mainly because increasing resistance is easier, and because of the bench, stabilization is improved, so fewer stabilizing muscle groups are recruited.

Push ups, however, are still hugely effective and can be adjusted as necessary to target different parts of the anatomy. Ideally, an effective chest routine should include variants of both exercises. 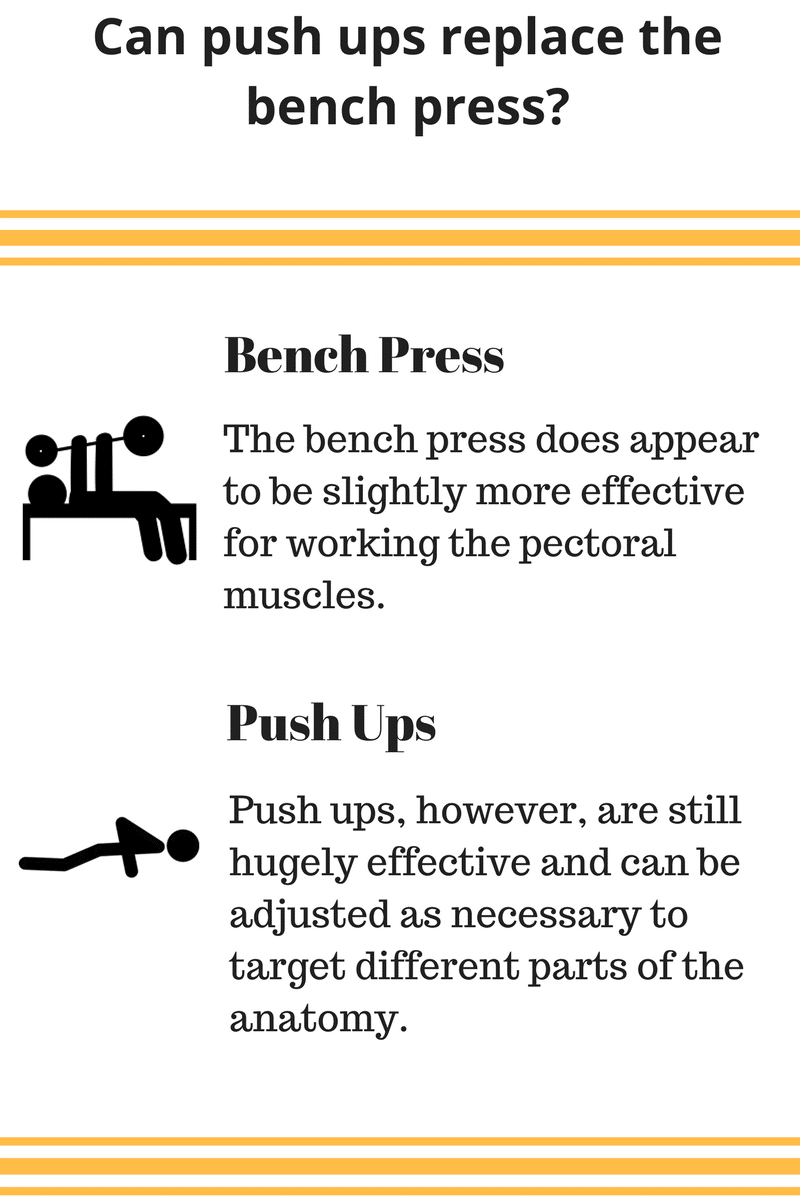 The Effect of NSAIDs on Muscle Growth