Which muscles give the upper body an impressive look? You may be thinking the pecs, biceps or abs. Actually, it’s the back muscles! Training this area should be at the top of your priorities. Why? Back muscles, after the leg muscles, are the second largest muscle group in the body. It’s also incredibly important to have a strong back that can handle heavy loads. In addition, because of our sedentary lifestyle, strengthening the back muscles is becoming much more important. Training the big muscle groups increases the secretion of useful hormones such as testosterone and growth hormone which help the muscles grow and maintain strength.

The back has many muscles which are arranged in several layers. For practical training needs, I would like to draw attention to the three most important.

Latissimus dorsi. The widest muscle in the body, covering the lower part of the back. This muscle gives the back an amazing V-shape. As you would expect from such a large muscle, it has many functions in the shoulder. The main functions are extending, adducting and rotating the shoulder. For example, pulling your arm back and moving it closer to the body.

Trapezius. The trapezius covers the upper back part, starting at the nape and connecting to the back middle portion (thoracic vertebrae T 12). It’s one of the widest muscles in the body, gaining its name from its shape. The muscle is divided into three parts: upper, middle and lower. The entire muscle works to adduct the scapula; such as when you move the shoulders back and draw the shoulder blades together. However, there are differences among the parts: 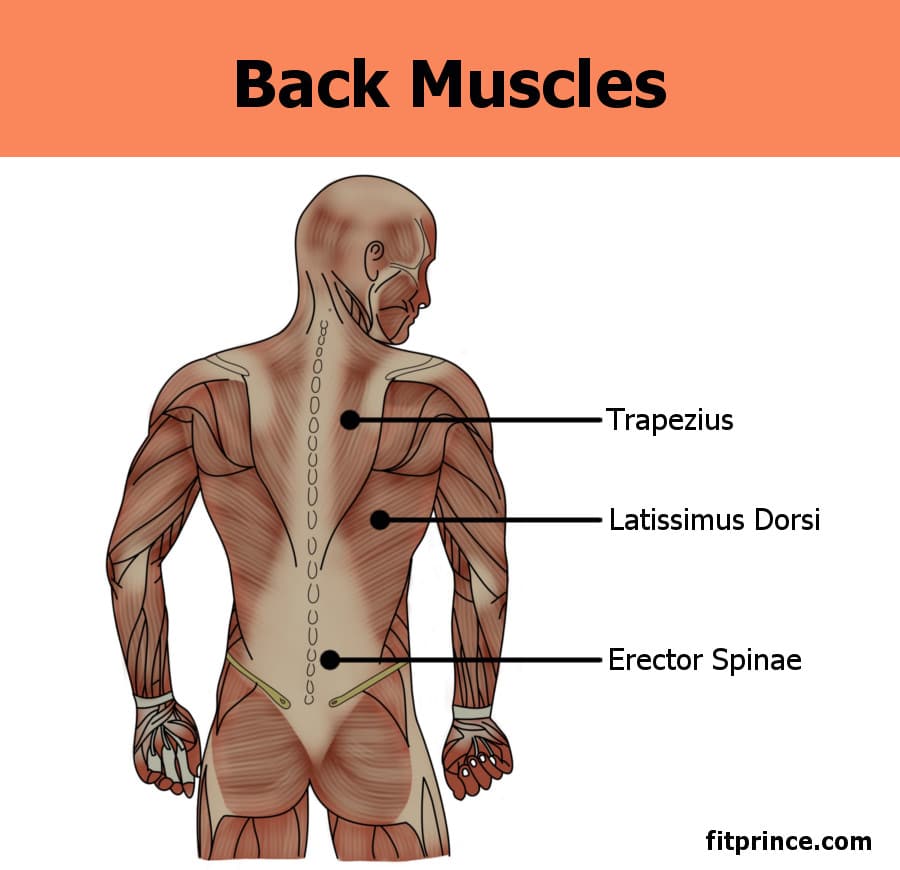 And now on to the workout …

For a proportional back, you need to train all three of these muscles. In many exercises, the latissimus dorsi and trapezius muscles work together. For example, performing a variety of pulling exercises with dumbbells, a barbell or machines work both muscles. However, by changing the hand spacing and positions, you can work on different parts of the back. The exception is with the upper part of the trapezius muscle which works much more on exercises like dumbbell or barbell shrug, deadlift and some shoulder exercises. Be careful with erector spinae, because it’s easy to overload which can cause serious injury. The muscle is loaded most in exercises such as the deadlift, squat and superman everywhere the spine is extended.

Two of the most typical mistakes when performing exercises are: focusing too much on the biceps and overloading the lower back. In order to use the biceps less during exercise, imagine pulling the weight with your elbows instead of your hands. More experienced trainers will know this. We will talk about the lower back later. 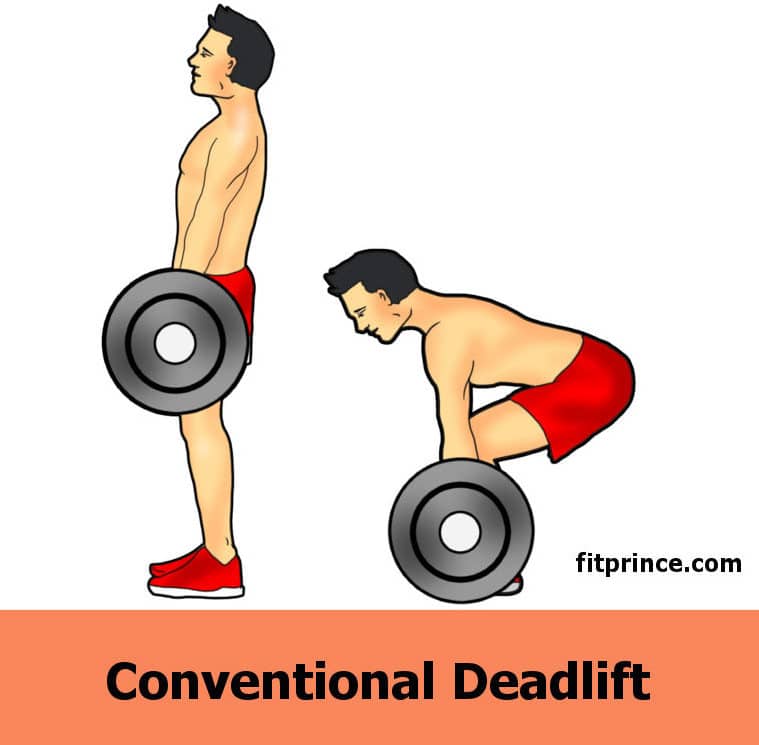 For beginners, I suggest two exercises. One for the erector spinae involving hyperextensions (back extensions). You can choose others but it’s usually best to use body weight exercises. This is because at the beginning, you need to be careful to avoid injury. Therefore, you should not immediately start with heavy, overbearing exercises like the deadlift. The second exercise you need to choose is for the latissimus dorsi and trapezius muscles. Examples include the one arm dumbbell row, lat pull down or seated cable row. The pull up is a fantastic exercise, but for beginners it could be too challenging. Sets: 2-3, erector spinae reps: 15-20, latissimus dorsi and trapezius reps: 10-15.

The average athlete can choose harder exercises such as the weighted pull up, barbell row or deadlift. For each exercise, complete 2 – 4, sets of 6 – 12 repetitions. However, sometimes you can go up to 20 or drop to 4 repetitions though, lower repetitions with a higher weight can increase strength more. Everything depends on the exercise, workout program, gender, etc. More training will also need to go to weaker, lagging muscles.

I don’t suggest training the back muscles on the same day as the biceps (or one by one exercises) or legs. During almost all back exercises, you also put some emphasis on the biceps. Therefore, at the same time (in the same day) making progress in both muscles will be difficult. The leg and back muscles are the two largest muscle groups on the body and performing many leg exercises also loads the back. Such a large load will affect both your mental and physical state, causing you to be exhausted in both. Back muscles are best trained together with the triceps or shoulders. These recommendations are more aimed at experienced athletes because beginner workloads are low, meaning there’s little risk of overtraining. 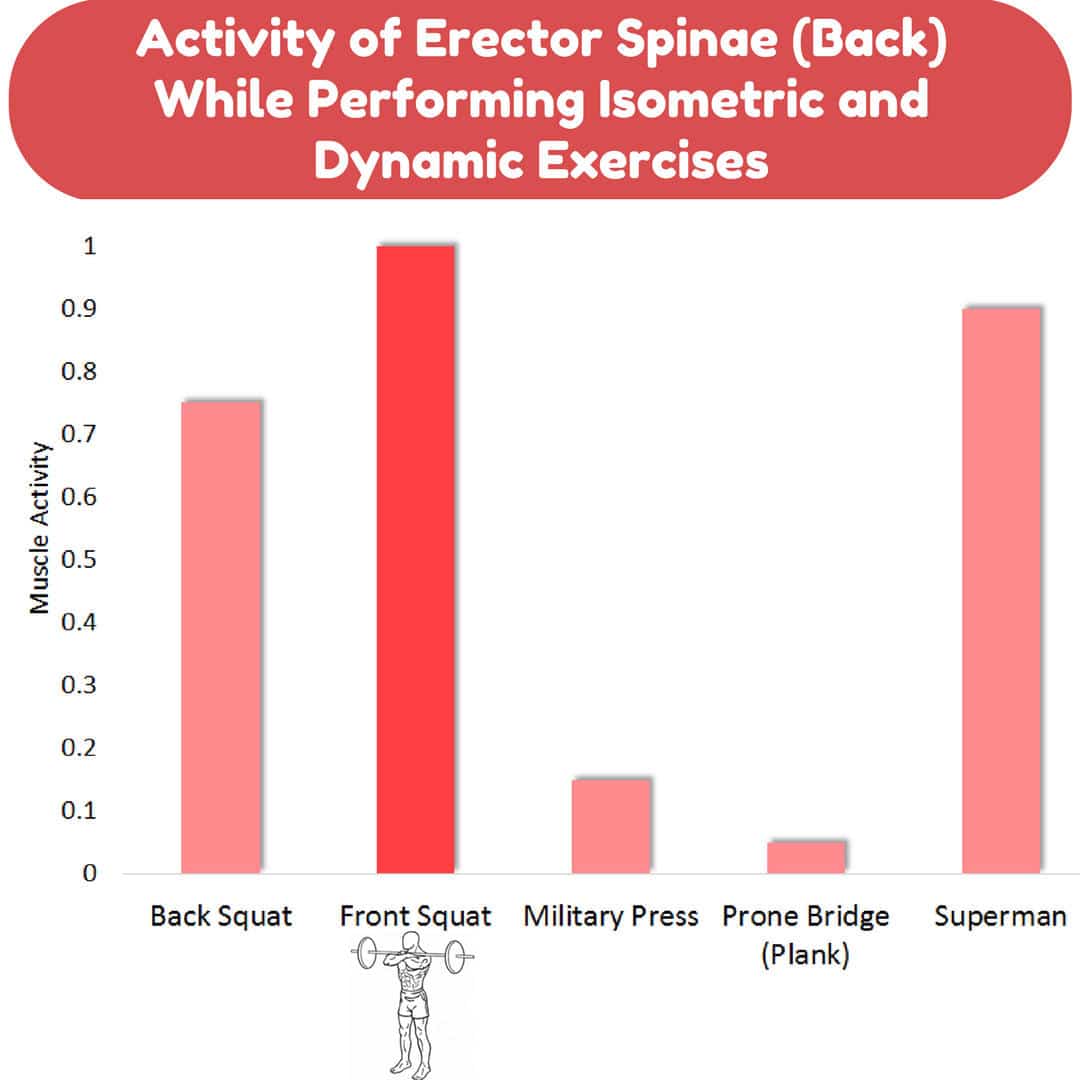 There are many causes of back pain: from weak muscles to internal organ problems. So, I will try to avoid talking about back pain outside of gym-related causes. The most common reason for why back pain might occur in the gym is by performing the exercise incorrectly and overloading the lower back. To prevent this, always make sure to keep your back straight and avoid bending your head back. If you feel that your lower back is not relaxed after a workout – do not load it in the following workout. This is another reason why I recommend you not train the back and legs together. You could easily hurt your lower back from tiredness. If you get the chance, a back massage is extremely helpful for relaxing your muscles. Any exercises which involve weight being lifted from the ground or a vertical load being placed on the body (standing press etc.) puts a heavy load upon the spine. Therefore, if you have any spinal problems – you need to be careful with these exercises or even avoid them. If you do have spinal injuries or back pain, then make sure that you attend the appropriate doctor. 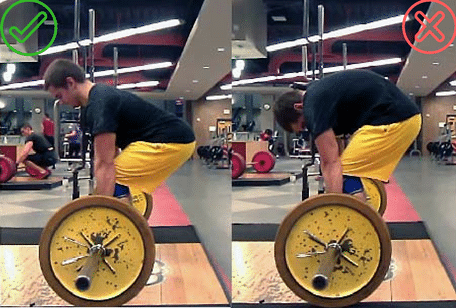 The Effect of NSAIDs on Muscle Growth

How to Build Massive Pecs

Full vs Partial Range of Motion: Which Works Better for Getting Bulky?

The Samson’s Chair Exercise: What you need to know