The world of health and fitness is an ever-expanding industry that’s always looking for the next big thing to change the game. New diets, apps, equipment, foods, and machines are constantly being discovered, invented or upgraded in the pursuit of building a better body, no matter what that means to you.

For instance, one of the biggest inventions to hit the market in recent years has been fitness trackers. Trackers allow for us to more accurately become informed about how many calories we’ve burned, how many steps we’ve completed, how far we’ve traveled, and how much activity we’ve done in general. Since then, we now have a myriad of apps that do the same thing, and far more advanced and accurate trackers which look like a normal watch opposed to a technical gadget or gizmo.

Hidden behind the endless amounts of trackers and apps, there’s technology aiming to help improve our fitness that’s progressed more than you might think. Created by Exertion Games Lab, Joggobot is a quadcopter designed to take the loneliness out of running. The creation stems from the idea that jogging by yourself can be quite boring and repetitive. Unless you have a real love for the exercise, getting into running can be quite tricky simply due to its repetitive nature.

Joggobot is a jogging companion with a frame made from polystyrene and plastic that’s propelled by 4 rotating fans that can take off, fly, and land all by itself. It will lift one meter in the air before scanning its environment for a specifically coloured marker, which the runner attaches to the front of their t-shirt. Once it finds the marker, it then takes itself 3 meters back to avoid the runner from hitting it on the jog. All you have to do then is run! No matter how fast you go Joggobot will stay 1 meter above the ground and 3 meters in front of you, adjusting its speed as you change pace.

The researchers are using Joggobot to find out how it affects the runner’s performance. We all know we might take more frequent breaks or reduce our speed as we get tired when running alone. Joggobot doesn’t offer the same benefits as a real jogging partner. It can’t talk to you, give you advice, or motivate you as for the time being it’s just another physical presence. Though, in time Joggobot may transform more into a coach, giving you tips in real time throughout your run.

Another aspect where drones could help us is to film our impressive feats in sport and exercise. AirDog is trying to change the game with their recording drone specifically designed for action sports. No longer will you need to invest in a camera man or ask your friend to film you as now you’ll have a drone to not only capture the moment, but get all of the best moments automatically.

Drones could change the way we record and view sports. We already know the capacity of drones to film our best and most interesting moments such as flying through fireworks or capturing a parade from above, an angle we would never have otherwise seen. Sure, there might be helicopters or blimps for big games, but nothing so small that it can fit in your backpack and soar through the air making minimal noise. Drones are essentially action cameras taken to the extreme. Even if you’re in the most dangerous or awkward spot to film, a drone will be able to take off and capture it on camera. 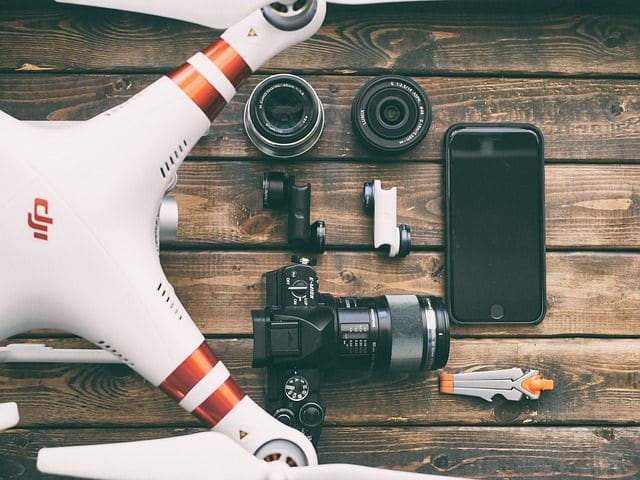 Let’s take the ideas from the app and now merge them with a drone and other devices. In the near future, you may be able to buy a pack that includes an app download, a drone, and a heart rate monitor. The app would then connect to the drone and the heart rate monitor to send and receive any relevant data such as steps, heart rate, distance, goal, and calories. The app could also double up as a social network so that you can share your data with other users for comparison and motivation.

The drone could check up on your health signals through using the heart rate monitor, adjust your pace and give you advice based upon the information it receives. If it needs your heart rate to go faster, then it can speed up, if it thinks you need a break, then it can slow down. It could also take you around certain routes and feedback split times for you to chase. If you want to get to a certain heart rate, then you can program the drone to get you there. The same goes for a certain distance, calorie amount or steps. The app could even give you nutritional information based upon the run you’re about to do and your goals or recommend music from other users.

Imagine a scenario where you want to train for a marathon. All you’d need to do is plug into the drone the amount of time you have until race day and it could formulate a plan for you. If not, then you could pick from a variety of marathon training plans on the app and send them to the drone to work out your plan. The app could contain an extensive list of training regimes for you to then select the one that suits you best. From here, you let the drone take over and guide you each day.

Drones will be everywhere

Now, imagine this being transferred over to other sports such as swimming, cycling, or weight training. The applications for swimming and cycling would be fairly similar, but for weight training the drone could record you and stream the videos back to your app so you could watch your lifts later on. It could then give you pointers and help with your technique as well as suitable assistance exercises to work on your weak points. Of course, drones won’t be able to fit inside  a gym so it may be limited to those who can exercise outside or the elite, but it doesn’t mean that it’s not a very real possibility. You could then share these videos via the app to other avid weightlifters and get their opinion, too.

The drone could film from the front, side, and back or even transform the video into a 3D experience as we already have the technology to do so. You could then look back through the video and rotate around yourself throughout to get the best angle.

Drones won’t take over from personal trainers of course, but they could work alongside them. A personal trainer can’t see every angle at once, so what if they had a companion who could monitor their client’s other side for them? While the trainer is focused on giving advice real time, the drone could then send the video to the client alongside a list of notes from the trainer for the client to take away and work on. This synergistic relationship between robot and human is where the world of technology is heading, and  the best areas would be for health and fitness.

We may not be at this level just yet, but it’s not far-fetched to say that we’ll get there very soon. With advances such as Joggobot and the ever expanding realm of fitness apps, at some point a company is going to hit the market with a solution to more than just one problem. It may come at a high price-tag at first, but over time the market will saturate and these technologies will become more affordable. Nevertheless, it’s definitely an exciting time to be a health and fitness enthusiast.

Rumble in the Jungle: the Fiber Faceoff

Warren Buffet as a Weightlifter